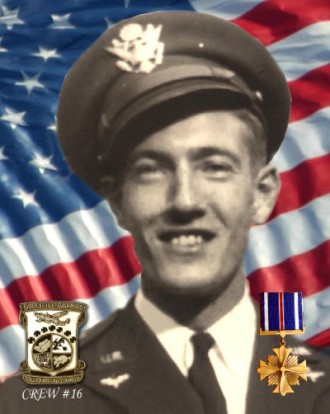 William G. Farrow was born on September 24, 1918 in Darlington. Those who knew him recall a young man who lived an exemplary life, a leader in youth activities at First Baptist Church, an Eagle Scout at 16, an excellent student and a 1935 graduate of St. John’s High.

Farrow was one of three USC students selected to begin pilot training at the Hawthorne Aviation School in Orangeburg in the fall of 1939. He then received his commission and the silver wings of an Army Aviator in 1941. He was then transferred to his duty station, the 17 Bomb Group in Pendleton, Oregon, and he transitioned to the B-25 Mitchell Bomber, the newest weapon in the Air Corps.

In January 1942, the 17 Bombardment Group had just moved from Oregon to the new Columbia Army Air Field when Lt. Col. Jimmy Doolittle asked for volunteers for a “secret,” highly hazardous mission. Training over Lake Murray and flying cross-country to Bush and Daniel Fields in Augusta, was soon replaced with puzzling short field take-off training in Columbia, and then Eglin Field, Florida.

On April 1, 1942, the crews and the B-25s were loaded aboard the USS Hornet and sailed under the Golden Gate Bridge, destination unknown, for a mission that would become part of the Doolittle Raid story:

Lt. Billy Farrow’s plane — the “Bat out of Hell,” Crew #16 — launched toward Nagoya, Japan’s fourth largest city. There, the plane’s bombs dropped from 500 feet, destroying an oil storage tank and inflicting damage with incendiary cluster on the Mitsubishi Aircraft Factory.

On April 19, 1942, 16 hours after leaving the USS Hornet, the B-25s engines sputtered out of gas. Lt. Farrow and his crew were forced to bail out shortly after crossing the south coast of Hanchung, China, which was Japanese held territory. The crew was captured, interrogated and tortured by the Japanese, who tried to force them to sign guilty confessions of war crimes.

In October, the Emperor commuted the death sentence of five airmen, but executions of Bill Farrow and two others would be carried out as scheduled. Farrow was permitted to write a letter to his mother, and he wrote a selfless letter of encouragement to his family, in which he said “…don’t let this get you down. Just remember that God will make everything right and that I will see you again in the hereafter.”

Farrow thanked his family for their entire help group in Darlington and closed with “So let me implore you to keep your chin up. Be brave and strong for my sake. P.S. My insurance policy is in my bag in a small tent in Columbia. Read: Thanatopsis by Brant if you want to know how I am taking this. My faith in God is complete, so I am unafraid.” (The letter was never mailed. Instead, it was discovered after the war in a secret Japanese file.)

The next morning at dawn, on October 14, Farrow and the other two airmen were tied to three crosses and a Japanese firing squad fired a single bullet into the forehead of each American. Their bodies were cremated and the ashes hidden in a Japanese mortuary until American investigators found them in 1945. Farrow finally came home in 1946, and his remains were buried with honor in Arlington National Cemetery. He was awarded decorations posthumously, including the Distinguished Flying Cross, Purple Heart and Chinese Breast Order of Pao Ting.