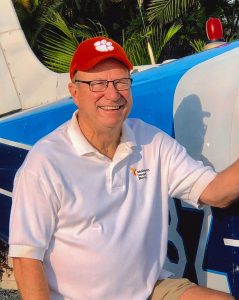 Wesley Frank Walker was born in Rock Hill on June 7, 1947. The proud son of a World War II B-17 pilot, Walker grew up in the Neelys Creek community, where he was a member of Boy Scout Troop 132 and earned the Eagle Scout Badge. He attended Clemson University as a member of the ROTC program and graduated with a BS degree in Industrial Management and an Army Infantry Second Lieutenant commission.

Walker reported to Army Aviation Flight School in June 1970. In November 1971, he began a tour in Vietnam, where he conducted multiple rescue operations as an OH-6A scout pilot, volunteering for perilous missions into heavily fortified areas and enduring enemy fire almost daily. Walker was awarded three Distinguished Flying Crosses and multiple Air Medal awards, including one with the “V” device for valor. On July 11, 1972, he volunteered for an operation to rescue the passengers and crew of a downed Marine helicopter deep inside enemy-held territory. He took heavy fire while coordinating the rescue of six men who would otherwise have been killed or captured. For his gallantry, Walker was nominated for the Congressional Medal of Honor and ultimately awarded the Distinguished Service Cross, the nation’s second-highest award for valor.

Upon returning to the United States, Walker was assigned to Ft. Jackson in Columbia. In 1979, he joined the South Carolina National Guard where he flew OH-58 and UH-1 helicopters, led the the 218th Infantry Brigade as section commander and served as Aviation Group logistics officer until his National Guard retirement in 1994.

Walker owned and operated Walker Electric Company until he retired in 2006. He continues his love of aviation, regularly flying his private plane along the Southeast coast and garnering thousands of flight hours. An example to all private pilots, he meticulously maintains his aircraft, is a no-nonsense pilot in command and is a leader in staying abreast of FAA rules and regulations.

Walker is one of the most decorated South Carolina National Guardsman living today. In 2008, Ft. Jackson dedicated Range 14 in his name in recognition of his service and status as a Distinguished Service Cross recipient.