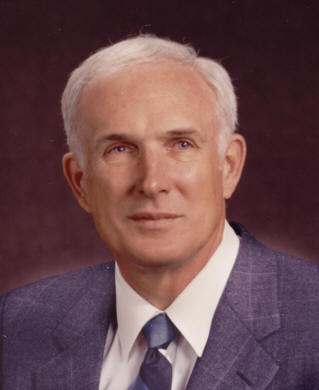 For Bob Russell, flying has been many things: a dream, a pass time, a service to his country, a performance and a true love. Russell was bitten by the flying bug when he was eight years old. As a teenager in Columbia, he flew gasoline models, dreaming of the day he would fly real planes.
He began flying when he was a sophomore at Clemson University. He organized and served as the first president of the Clemson Aero Club when he soloed in a Piper Cub and accumulated his first 400 flight hours. In 1952, he graduated from Clemson with a degree in Industrial Education and his commission as a Second Lieutenant in the U.S. Air Force. Immediately after graduation, Russell entered the military flight training and received his jet pilot wings in July 1953.

During his Air Force service, he attended all weather fighter school at Moody Air Force Base and served in Labrador during the Korean War. After his discharge, he joined the South Carolina Air National Guard, serving overseas in Spain during an International crisis. He flew F-94s, F-80s, F-86s, F-104s and F102s, which contributed substantially to his total of more than 8,000 flight hours.

Russell has flown three airplanes in air shows: a modified DeHavilland “Chipmunk” DHC-1B-2S3, A Marchetti SF 260 Waco “Meteor” and the Extra 300S he currently flies. Russell has served in numerous leadership roles for charitable organizations and professional societies. He is listed in “Who’s Who in America,” “Who’s Who in American Aviation” and “Personalities of the South.” In 2003, he was named South Carolina Aviator of the Year.

Bob Russell, of Columbia SC, has always driven himself to be the best. From his time at Clemson University. where he learned to fly and started the Clemson Aero Club, to his career in the USAF and the SC National Guard (where he flew the F-80, F-89, F-94, F-86, F-102 and the F-104) Russell always risen to the top of his profession.

At age 12, Russell had seen Bevo Howard fly at an airshow over Owens Field in Columbia SC, it was natural for Bob to seek advise from the greatest airshow pilot of the time. Howard accepted Russell as a protégé and a long airshow career blossomed across the skies of the Carolinas, the eastern US.

I never worked with Bob Russell while he was flying the SF-260. My first association was in the mid 70’s when Bob had moved into a DHC-1 Chipmunk. He had been introduced to De Havilland Canada (DHC) trainer by Dr. Joe Newsome, Cheraw SC, who owns a stable of aircraft.

Bob purchased his Chip from Bill Gantt, Macon GA. It had been re-built by Spinks in San Antonio TX to specifications of Harold Krier. (Walt Pierce remembers having flown the aircraft from Montréal to Texas in January of ’69.)

Russell, every the perfectionist, continued to modify his Chipmunk. I remember, many times, walking into the Eagle Aviation maintenance hanger at CAE (Columbia SC Metro Arpt) to find Bill Holecek (Eagle’s maintenance supervisor and resident A&P genius) with Bob’s Chip in many pieces.

Over the years, the DHC-1’s Gypsy Major engine was replaced by a Ranger (WWII mfg plant in Burlington NC) then a Lycoming GO-480 that turned out 295 HP. The GO-480 was the same engine used in the Heilo-Courier (an aircraft then being sold to Air America (read CIA) and USAF Special Ops by JAARS first pilot, Larry Montgomery out of his Spartanburg SC office (this story does get convoluted!)).

Russell flew the Chipmunk hard, extracting ever bit of performance available from the aircraft and himself. In the process, he broke the Chip on many occasions but his cool thinking and flying ability always allowed him to work around the situation and then work with Holecek to repair and modify the airplane to an even higher plane of performance. (During one period, Bob landed on so many highways the hanger kibitzers joked (behind his back) that he needed auto license plates for the Chip.)

Reid Garrison (Anderson SC) allowed me the privilege of flying a number of Chipmunks, most important to me personally was N13A, Art Scholl’s original Ranger powered Chip.

The DHC-1 is a great aircraft but it stills takes a great pilot to bring those qualities to the fore. Harold Krier, Art Scholl and Bob Russell built an airshow careers on those qualities. I proud to be distantly connected with that legacy.

Bob Russell continues to fly and perform in airshows. He now flies an Extra 300, still based out of Columbia SC.

Bob has writen an excellent book about his love of the sky: “Touching the Face of God.” Published in 1992, its still available from: Bevo Press at the above address .The price is 10.95 a copy. A good read.