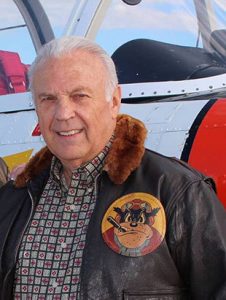 While at Clemson, he worked as a “line boy” for Carolina Aero Service in Anderson, learning to fly while earning $1 per hour. He later traded work for flying instructions. He received his private pilot certificate in 1959 while at Ft. Benning, Georgia.

After graduating from Clemson, Garrison entered the U.S. Army as a 2nd Lieutenant. He completed the Officer Basic Course and then graduated from the U.S. Army helicopter flight school. During his army career, he served as a rotorcraft helicopter pilot and flight instructor. In 1963, he returned to the civilian status but remained in the reserves until he retired as a captain in 1983.

He returned to work at the Anderson County Airport with the Carolina Aero Service, as a flight instructor and mechanic. In September 1965, he was awarded a contract to build and develop a Fixed Base Operation (FBO) at the Clemson-Oconee County Airport. While there, he provided flight training for U.S. Army and Air Force cadets enrolled in ROTC programs.

Garrison was instrumental in acquiring the first airplane to be donated to the Clemson University Athletic Department. He operated this aircraft as a pilot-in-command for almost a year while also providing air carrier charter service to Clemson.

He purchased Anderson Aviation, Inc. in Anderson in 1975. He operated both the Clemson and Anderson airports as a full fixed base operation that included a flight school, a charter and helicopter service, and an aircraft maintenance and avionics shop. He sold the Clemson operation to Oconee County in 1979.

Garrison continued to operate the Anderson Airport as a full-service FBO until 1999. During this period, he maintained and managed two separate Federal Aviation Regulation (FAR) Part 135 air carrier services with twin-engine airplanes and rotorcraft helicopters.

In 1972, Garrison acquired the famous Art Scholl Chipmunk aircraft N13A, and he launched his aerobatic career. For about 12 years, he flew N13A in air show demonstrations.

Garrison was passionate about the restoration of WWII aircrafts, and he restored a Beech T-28, two North American T-6Gs, and a Beech Dehavilland Chipmunks from London, England and Lisbon, Portugal. His prize restorations are the two restored Beech T-34s.

In 2001, Garrison was contracted by MedShore Ambulance Service to create a Medicav helicopter operation. Garrison worked with the FAA to establish, Skycare, LLC, the first Helicopter Medivac certified by the South Carolina Flight Standards District Office. Garrison served as Director of Operations and chief pilot until 2011.

Garrison was a Safety Counselor for South Carolina Flight Standards District Office (FSDO) for 25 years. What began as a small town boy’s enthusiasm turned into a career that spanned a lifetime.