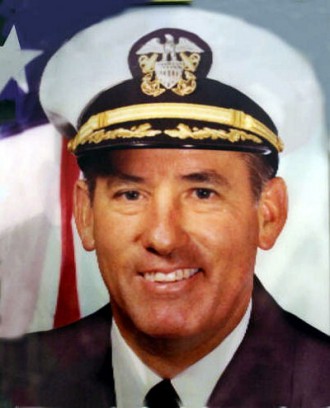 Flatley also had an outstanding career as a Naval aviator, earning the Air Medal and Distinguished Flying Cross, among many U.S. and foreign awards.

Further, in special airmanship, Flatley demonstrated the possibility of operating the large C-130 Air Force transport on and off of Navy aircraft carriers. Flatley made not one, not 10, but 29 “Touch and Gos” and 21 “Full Stop Landings” on the carrier USS Forrestal.

Flatley was made an Admiral, thus following in the footsteps of his father who was the USS Yorktown’s first Air Group Commander, in WW II. Flatley retired in July 1987 to Charleston and continues to be a force in South Carolina Aviation.

Flatley was named to U.S. Naval Aviation Carrier Hall of Fame in 1999.

When Lt. James H. Flatley III was told about his new assignment, he thought somebody was pulling his leg. “Operate a C-130 off an aircraft carrier? Somebody’s got to be kidding,” he said.
Lockheed C-130 Hercules

Thanks to The Aviation Zone
C-130 Hercules Lands on U.S.S. Forrestal

When one reviews the encyclopedic range of accomplishments by the C-130 Hercules and its valiant aircrews over the years, surely one of the most astounding took place in October 1963 when the U.S. Navy decided to try to land a Hercules on an aircraft carrier. Was it possible? Who would believe that the big, four-engine C-130 with its bulky fuselage and 132-foot wing span could land on the deck of a carrier?

Not only was it possible, it was done in moderately rough seas 500 miles out in the North Atlantic off the coast of Boston. In so doing, the airplane became the largest and heaviest aircraft to ever land on an aircraft carrier, a record that stands to this day.

When Lt. James H. Flatley III was told about his new assignment, he thought somebody was pulling his leg. “Operate a C-130 off an aircraft carrier? Somebody’s got to be kidding,” he said. But they weren’t kidding. In fact, the Chief of Naval Operations himself had ordered a feasibility study on operating the big propjet aboard the Norfolk-based U.S.S. Forrestal (CVA-59). The Navy was trying to find out whether they could use the Hercules as a “Super COD” – a “Carrier Onboard Delivery” aircraft. The airplane then used for such tasks was the Grumman C-1 Trader, a twin piston-engine bird with a limited payload capacity and 300-mile range. If an aircraft carrier is operating in mid-ocean, it has no “onboard delivery” system to fall back on and must come nearer land before taking aboard even urgently needed items. The Hercules was stable and reliable, with a long cruising range and capable of carrying large payloads.

The aircraft, a KC-130F refueler transport (BuNo 149798), on loan from the U.S. Marines, was delivered on 8 October. Lockheed’s only modifications to the original plane included installing a smaller nose-landing gear orifice, an improved anti-skid braking system, and removal of the underwing refueling pods. “The big worry was whether we could meet the maximum sink rate of nine feet per second,” Flatley said. As it turned out, the Navy was amazed to find they were able to better this mark by a substantial margin.

In addition to Flatley, the crew consisted of Lt.Cmdr. W.W. Stovall, copilot; ADR-1 E.F. Brennan, flight engineer; and Lockheed engineering flight test pilot Ted H. Limmer, Jr. The initial sea-born landings on 30 October 1963 were made into a 40-knot wind. Altogether, the crew successfully negotiated 29 touch-and-go landings, 21 unarrested full-stop landings, and 21 unassisted takeoffs at gross weights of 85,000 pounds up to 121,000 pounds. At 85,000 pounds, the KC-130F came to a complete stop within 267 feet, about twice the aircraft’s wing span! The Navy was delighted to discover that even with a maximum payload, the plane used only 745 feet for takeoff and 460 feet for landing roll. The short landing roll resulted from close coordination between Flatley and Jerry Daugherty, the carrier’s landing signal officer. Daugherty, later to become a captain and assigned to the Naval Air Systems Command, gave Flatley an engine “chop” while still three or four feet off the deck.

Lockheed’s Ted Limmer, who checked out fighter pilot Flatley in the C-130, stayed on for some of the initial touch-and-go and full-stop landings. “The last landing I participated in, we touched down about 150 feet from the end, stopped in 270 feet more and launched from that position, using what was left of the deck. We still had a couple hundred feet left when we lifted off. Admiral Brown was flabbergasted.”

The plane’s wingspan cleared the Forrestal’s flight deck “island” control tower by just under 15 feet as the plane roared down the deck on a specially painted line. Lockheed’s chief engineer, Art E. Flock was aboard to observe the testing. “The sea was pretty big that day. I was up on the captain’s bridge. I watched a man on the ship’s bow as that bow must have gone up and down 30 feet.” The speed of the shop was increased 10 knots to reduce yaw motion and to reduce wind direction. Thus, when the plane landed, it had a 40 to 50 knot wind on the nose. “That airplane stopped right opposite the captain’s bridge,” recalled Flock. “There was cheering and laughing. There on the side of the fuselage, a big sign had been painted on that said, “LOOK MA, NO HOOK.”

From the accumulated test data, the Navy concluded that with the C-130 Hercules, it would be possible to lift 25,000 pounds of cargo 2,500 miles and land it on a carrier. Even so, the idea was considered a bit too risky for the C-130 and the Navy elected to use a smaller COD aircraft. For his effort, the Navy awarded Flatley the Distinguished Flying Cross.

Excerpts from Herk: Hero of the Skies, by Joseph Earl Dabney, Airlines Publications and Sales, Ltd., 1979.
The Videos
View the Landing! View the Takeoff!