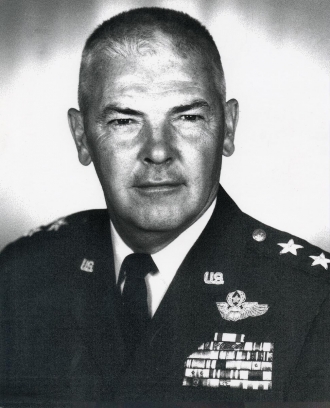 Major General Jones E. Bolt was born in Ware Shoals in 1921. He graduated from high school at Williamston and earned an engineering degree from Clemson University in 1942. He also earned a reserve commission as second lieutenant in the U.S. Army.

Bolt flew 15 combat missions in April 1944 with the 362nd Fighter Bomber Group in the European Theater of Operations before he was forced to bail out of his airplane because of engine failure. He landed in a German Command Post just outside of Paris France and was taken prisoner. General Bolt was sent to Stalagluft 3, a prisoner of war camp near Sagan, Germany and was one of the prisoners of war on the infamous march from Stalagluft 3 to Stalagluft 7A at Mooseburg during January and February 1945. He was liberated from the prisoner of war camp in April 1945.

He returned to the United States in 1945, and he attended Aircraft Engineering School at Chanute Field, Ill. In June 1946, he was assigned as flight test maintenance officer for F-80 aircraft at Williams Field, Az and was later assigned as deputy commander for maintenance, Maintenance and Supply Group.

In 1948, he assisted in the formation of and flew right wing on the first Air Force jet aerobatic team, The Aerojets, until August 1950. At that time, the team was halted because of the Korean War. When reactivated in 1952, the team was renamed the Thunderbirds.

In August 1950, he was transferred to the 86th Fighter Wing in Munich, Germany and served as commander of the 526th Fighter Bomber Squadron. In November 1953, he returned to the U.S. and attended the Air Command and Staff College at Maxwell Air Force Base. After graduation, he was transferred to the War Plans Division of the U.S. Air Force in Washington DC, where he was involved in Air Force commitments and deployments to NATO and correlating war plans associated with these forces. His last year there, he was a member of the Force Structure Committee that involved future plans for the U.S. Air Force.

In July 1958, General Bolt was assigned as commander of the 53rd Fighter Interceptor Group, Sioux City, Iowa, and in October 1959, he became commander of the 328th Fighter Wing, Aerospace Defense Command, at Richards-Gebaur Air Force Base, Mo. He was assigned to the 18th Tactical Fighter Wing on Oinawa as deputy commander in July 1961. In February 1963, after completing F-105 aircraft operational training at Nellis Air Force Base, Nev., General Bolt planned and led the first nonstop flight of Thunderchiefs from Hickman Air Force Base, Hawaii, to Kadena Air Base, Okinawa, via Wake and Guam. This marked the first time a single engine fighter had flown such long distances over water. In May 1964, he became commander of the 18th Tactical Fighter Wing.