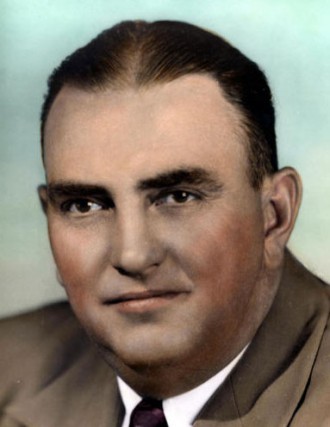 Dusty Huggins is one of America’s most colorful and successful fliers engaged in agricultural spraying and dusting. He started flying in the late 1920s.

He started Huggins Airpark in Timmonsville in 1937, and in 1938, he became a charter member of the South Carolina Breakfast Club. He joined a new company known as Delta Airlines in 1941, participating in the company’s crop dusting venture. In 1946, Huggins started his own aerial application business in South Carolina, and he later pioneered aerial pest control in North Dakota.

In 1955, he began working with SLED, looking for liquor stills as well as people, whether lost or fugitives from the law. Huggins located more than 10,000 stills while working with SLED, and saved at least 15 people. His dog Edgar was his constant companion for 16 years and flew more than a million air miles with him.

Huggins is known to have given more free flying lessons than those for which he was paid. Although a master yarn spinner and a hard-core practical joker, he was all business during instruction. His job called for precision and, as one friend said, “Dusty is a big man who climbs into a small plane and flies with an exactness that is nothing short of spectacular.”

Now THIS is a home airport

Huggins Memorial Airpark at Timmonsville, S.C., is long on flying history and short on formality. For visitors, that means it takes about five minutes to go from introductions to a first-name basis with regulars at the airfield (58J), which lies directly beside S.C. Highway 76 on the outskirts of Timmonsville in the Pee Dee area near Florence.

The personality of one man, M.B. “Dusty” Huggins II, dominates the history of the field. Huggins carved out a 30- by 1,400-foot strip on the site in 1931. Over the next 40 or so years, he taught more than 150 people to fly and helped popularize general aviation in South Carolina.

Today, Huggins Memorial’s runway is 150 by 3,675 feet of well-manicured grass. The place is run by M.B. Huggins III, whom everyone calls Sonny. “There are currently 40 planes hangared here,” he says. “We have every kind of plane from Tri-Pacer to T-6 to Nanchang CJ-6. I think we’ve got the most planes of any grass strip in the state.”

There is also a small airpark with a number of houses at the end of the field. “But we have always completely maintained the field and the lights,” he says.

On a recent Sunday afternoon, Huggins welcomed visitors and a dozen or so regulars to the main hangar, which is packed with memorabilia from nearly 75 years of Huggins family flying experiences. There’s a comfortable corner with easy chairs and a couch where most of the hangar flying is done. Sonny’s wife, Bettie, is usually at his side, while designated airfield chef Billy Parker is never far away. Parker is responsible for the delicious chicken bog meals that regularly draw a good turnout of visitors.

“People here remember Mr. Huggins,” said Bettie, as she stood by the memorial marker at the entrance to the field. “His spirit is still here.”

Sonny Huggins noted his father, who was named to the South Carolina Aviation Hall of Fame in 1995, pioneered crop spraying in North Dakota. “He went there in the early 1940s to Grand Forks,” he said. “He laid the first swath of dust in the Red River Valley. That’s how he got the name Dusty, from crop dusting.” Dusty Huggins also sprayed thousands of acres in his native South Carolina over the years.

In the 1950s Dusty Huggins began flying for the State Law Enforcement Division (SLED). “He found more than 10,000 liquor stills while searching from the air,” Sonny said, noting his father logged more than 31,000 hours before he died in 1973.

Sonny Huggins succeeded his father in the cockpit for SLED and served 28 years as a state law officer. When he retired five years ago, he was honored for flying more than 11,000 hours for the state and was credited with finding more than 250,000 marijuana plants during drug suppression flights.

Sonny’s logbook totals nearly 18,000 hours, including 10 years flying as a crop duster. He now works as an observation pilot for the Georgetown County Sheriff’s Department.

The group at Huggins Memorial is always enlivened by the appearance of Legrand Ham, a pilot, aircraft builder and storyteller who was taught to fly by Dusty Huggins in 1958. After years of building airplane models, he built a kitplane in 1996. “It’s a Team Minimax and I’ve put 800 hours on the plane and had eight forced landings,” he explains.

“See Legrand if you want to talk about real flying adventure,” interjects one Huggins regular.

“I’ll admit, I’ve gone down a few times,” Ham says amid loud chuckles from his friends in the hangar. “But every time the Lord gave me somewhere to go.” His unplanned landing sites include a cow pasture, a wheat field, a cotton field and an access road. He prefers to call his forced landings “motor outs,” as all have come because of failures in the Subaru car engine that powers his Minimax.

Another regular is Sonny Brown, a great nephew of Dusty Huggins, who flies his 60-horsepower Aeronca Champ from the field. Sonny Brown, like Sonny Huggins, lives at the field and does most of the grass cutting. Brown also owns one of the most unique aircraft on the field, a World War II BT-13 basic trainer.

Brown’s BT-13 is a rarity. Records indicate 11,537 BTs of all types were built, but only about 100 remain, with about half that number in flying status. Brown’s plane is not airworthy.

Perhaps the most unusual thing at the field is a barber shop. It’s operated by Frank Keo, an Isle of Palms, S.C., resident who cuts hair Tuesdays through Saturdays. “He was born here,” Sonny Huggins said, “and Daddy let him have space for the barber shop on the field.”

Longtime flyer Bobby Weatherly proudly shows off his 1952 Tri-Pacer and talks about being taught to fly by Dusty Huggins more than 50 years ago.

“Mr. Huggins was a very good instructor,” he said. “He had a natural feel for flying an airplane. But he did not take to the adage that negative reinforcement was bad. He would slap you behind the head. Still, he’d solo a student as quickly as anyone.”

Another claim to fame for Huggins Memorial: Stock car racing great Cale Yarborough, a Timmonsville native, flew from the field. “Cale and I bought a J-4 Cub Coupe for $700 and flew it from here,” Weatherly recalls.

Gerold Ellsworth, an instrument instructor, notes that Huggins Field, with Florence Regional Airport nearby, is a perfect place to provide instrument training. “You can take off without complications and immediately begin instrument work and approaches for Florence,” he notes.

Sonny, of course, flies from the field to and from his work with the Georgetown County Sheriff’s Department. His ambition is to equal his father’s dedication to law enforcement and flying.

“My dad flew until the day he died,” he says. “He put the plane in the hangar and died 12 hours later and I’m going to do the same. I just want to fly until I can’t do it anymore.”