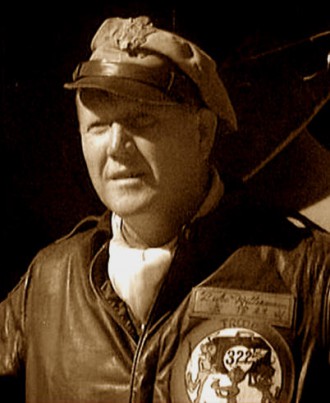 John Henry “Luke” Williamson was born on April 18, 1906 and raised in Ninety Six. In 1927, he entered the US Army as an Air Cadet, finished in 1928, and became an instructor of cadets at Brooks Field, TX (later Brooks AFB).

The 14th Air Force Historical Office Staff would later write: “He was one of the finest instructors ever stationed at Brooks Field.” Williamson went from reserve to active duty in 1930 as an instructor at the Air Corp Tactical School (ACTS) at Maxwell Field, Al. (later Maxwell AFB).

While an Air Cadet and instructor, Williamson would fly his Boeing P-12 bi-plane to his family home in Ninety Six, perform acrobatics for the locals, and land next to his family home on an airstrip he had prepared for this purpose. These occasions were looked forward to and witnessed by Senator John Drummond as a young boy, along with other local residents. Thus, Williamson is attributed with having established the first airstrip in the Greenwood Ninety Six area.

In 1932, the Army Air Corp. created its first acrobatic flying team. Williamson was named as one of the first three pilots. First named the “Dixie Trio,” they soon became dubbed “The Flying Trapeze.” The Flying Trapeze flew bi-wing Boeing P-12’s.

Colonel Mao Pangchu of China saw Williamson in a show and offered him a lucrative position in China as advisor and instructor for the Chinese Air Force.

Returning home in 1942, he joined Delta Airlines as Chief Check Pilot and kept that position until he died of a stroke in 1957 in Atlanta.