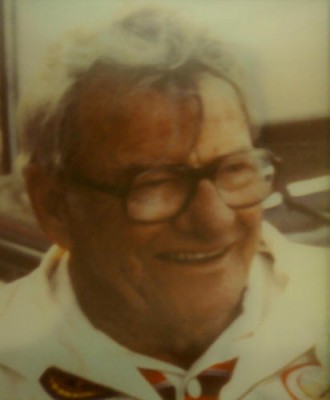 A World War II fighter pilot and a POW, he was an instructor and Glider Examiner designee. He helped thousands of pilots earn glider ratings and was instrumental in making Chester famous as a competition site for regional and national soaring contests.

Giltner served as an airport commissioner and was a former postmaster.

This trophy was commissioned and endowed by a group of soaring pilots in 1981 to commemorate the memory of Joe Giltner following his death. Mr. Giltner, from Chester, South Carolina, was a dedicated soaring instructor and an outstanding competitor. For the trophy his friends chose a bronze sculpture of an osprey about to take flight to symbolize Joe’s love of flying and especially soaring. This trophy is perpetual and is awarded annually to the pilot scoring the fastest official speed on a task during the U.S. 15-Meter National Soaring Championships. The trophy remains in the custody of the winner for one year and then is passed on to the next winner. Each recipient is also given a handsome certificate to commemorate the award.