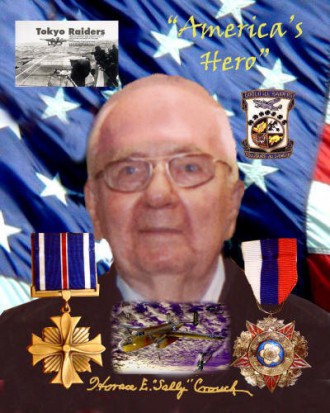 A native of Columbia and a graduate of the Citadel class of 1940, Horace Ellis “ Sally” Crouch began his career as a Flying Cadet from the first U.S. Army Air Force Navigator School, Barksdale Air Base.

As a navigator and a bombardier early in his career, Crouch flew in the first coastal patrol of World War II off the Oregon and Washington coast. He participated with the Doolittle Tokyo Raiders on the first Bombardment mission on the mainland of Japan of World War II on April 18, 1942. After the raid on Japan, he flew missions with the American Volunteer Group (AVG) in China, as a member of the 11th Bomb Squadron.

The April 1942 air attack on Japan, launched from the aircraft carrier Hornet and led by Lieutenant Colonel James H. Doolittle,

was the most daring operation yet undertaken by the United States in the young Pacific War. Though conceived as a diversion that would also boost American and allied morale, the raid generated strategic benefits that far outweighed its limited goals.

The raid had its roots in a chance observation that it was possible to launch Army twin-engined bombers from an aircraft carrier, making feasible an early air attack on Japan. Appraised of the idea in January 1942, U.S. Fleet commander Admiral Ernest J. King and Air Forces leader General Henry H. Arnold greeted it with enthusiasm. Arnold assigned the technically-astute Doolittle to organize and lead a suitable air group. The modern, but relatively well-tested B-25B “Mitchell” medium bomber was selected as the delivery vehicle and tests showed that it could fly off a carrier with a useful bomb load and enough fuel to hit Japan and continue on to airfields in China.

Gathering volunteer air crews for an unspecified, but admittedly dangerous mission, Doolittle embarked on a vigourous program of special training for his men and modifications to their planes. The new carrier Hornet was sent to the Pacific to undertake the Navy’s part of the mission. So secret was the operation that her Commanding Officer, Captain Marc A. Mitscher, had no idea of his ship’s upcoming employment until shortly before sixteen B-25s were loaded on her flight deck. On 2 April 1942 Hornet put to sea and headed west across the vast Pacific.

Joined in mid-ocean on 13 April by Vice Admiral William F. Halsey’s flagship Enterprise, which would provide air cover during the approach, Hornet steamed toward a planned 18 April afternoon launching point some 400 miles from Japan. However, before dawn on 18 April, enemy picket boats were encountered much further east than expected. These were evaded or sunk, but got off radio warnings, forcing the planes to take off around 8 AM, while still more than 600 miles out.

Most of the sixteen B-25s, each with a five-man crew, attacked the Tokyo area, with a few hitting Nagoya. Damage to the intended military targets was modest, and none of the planes reached the Chinese airfields (though all but a few of their crewmen survived). However, the Japanese high command was deeply embarrassed. Three of the eight American airmen they had captured were executed. Spurred by Combined Fleet commander Admiral Isoroku Yamamoto, they also resolved to eliminate the risk of any more such raids by the early destruction of America’s aircraft carriers, a decision that led them to disaster at the Battle of Midway a month and a half later.

Dinner in San Francisco hotel prior to departure aboard USS Hornet.

(Mr. Joyce’s site is highly recommended for additional information on the Raiders.)