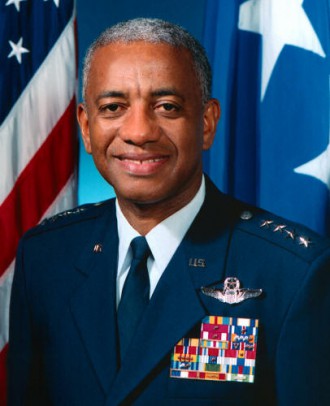 General Newton was born in Ridgeland, South Carolina, where he graduated from Jasper High School. He earned a Bachelor of Science degree in aviation education and commissioned a Second Lieutenant from Tennessee State University, Nashville, Tennessee in 1966. In 1985, he received a Master of Arts degree in Public Administration from George Washington University, Washington, D.C.

In 1968, he flew 269 combat missions in Vietnam and was selected to join the U.S. Air Force Aerial Demonstration Squadron, the Thunderbirds, in November 1974.

From 1978 to 1982, he was assigned as an Air Force congressional liaison officer with the U.S. House of Representatives, Washington, D.C. He has commanded three wings, an air division and held numerous senior staff positions.

He served as the Director of Operations, United States Special Operations Command and as the Assistant Vice Chief of Staff Headquarters U.S. Air Force. Newton culminated his Air Force career as the Commander, Air Education and Training Command where he was responsible for recruiting, training and education for all Air Force personnel. His command consisted of 13 bases, 43,000 active duty personnel and 14,000 civilians.

Lloyd W. “Fig” Newton, General USAF (Ret) is the Vice President for International Programs and Business Development for Pratt & Whitney Military Engines, East Hartford, Connecticut. As Vice President, he is responsible for international military sales, assessing U.S. military requirements and developing business for Pratt’s military engine services. He leads a team of 45 personnel who manages a host of domestic and international customers with a sales target of nearly $1 Billion.

WASHINGTON — When he was a teenager, Air Force Gen. Lloyd W. “Fig” Newton’s father asked him and his brothers, “What’s the most important four-letter word in the English language?”

The boys scratched their heads in deep thought, toying with such words as “love.”

“He told us, the more you know, the better off you’re going to be,” said Newton, 54, currently the Air Force’s only African-American four-star general. “And now, I invite all youngsters to ‘know.’

For the first time in history, the three military departments have African-American four-star officers serving at the same time. The other two are Gen. Johnnie E. Wilson commander of the Army Materiel Command in Alexandria, VA.; and Adm. J. Paul Reason, commander of the Atlantic Fleet in Norfolk, VA.

Newton, commander of the Air Education and Training Command at Randolph AFB, TX, is responsible for the recruiting, training and education of all Air Force personnel. His command includes the Air Force Recruiting Service, the 19th Air Force at Randolph, the 2nd Air Force at Kessler AFB, Mississippi and the Air University at Maxwell AFB, AL. His command consists of 13 bases and more than 43,000 active duty service members and 14,000 civilian employees.

As a youngster, Newton often stood in the fields of the family farm in Ridgeland, SC, watching airplanes flying overhead but not thinking about being a pilot, he said. At that time, military uniforms fascinated him more than airplanes.

“My second cousin was in the Army, and I always looked forward to him coming home in his uniform,” Newton reflected. “I said, ‘When I grow up, I really want to be like him.’ ”

His fascination with uniforms turned to airplanes at Tennessee State University in Nashville. “They had an aviation program at Tennessee State; ROTC was mandatory at that time,” said Newton, who worked his way through college on work-study programs. “The advanced part of Air Force ROTC had some flying involved, so I changed my major to aviation. I got flying as part of my major curriculum as well as part of ROTC. That’s when I really got interested.”

Graduating with a bachelor of science degree in aviation education, he was commissioned as a distinguished graduate through the ROTC program in 1966. Newton completed pilot training at Williams AFB, AZ in June 1967.

His interest in flying was also sparked in 1964 when he saw the Air Force Thunderbirds aerial demonstration team perform during his junior year of college. He said he became consumed with a burning desire to be a Thunderbird. At the time, the team had never had an African-American pilot. That didn’t deter Newton.

“When I came into the Air Force my goal was to become a Thunderbird pilot,” he said. Three tryouts with two rejections didn’t thwart his quest. “Roughly ten years later, it happened. In the fall of 1974, as it turned out, I was the first African-American Thunderbird pilot.”

He held several positions in the Thunderbirds, including narrator, slot pilot and right wingman.

Two of his brothers, Donald and Lester, also majored in aviation at Tennessee State and became Air Force officers. “We’ve all been in the flying business,” Newton said. “My youngest brother, Don, was a weapons controller on an AWACS (Airborne Warning and Control System) aircraft. He’s a full colonel, a detachment commander at the University of Maryland.

“Unfortunately, we lost Lester in an aircraft accident in 1985,” Newton said. “He wasn’t a combat pilot, but he flew C-130’s in and out of Vietnam.”

Newton left for Vietnam on April 4, 1968, the day Martin Luther King, Jr. was assassinated. He said he was confused about going because “I wasn’t sure whether the war was in Vietnam or here in America.”

Racial strife abounded across the nation while Newton was fighting the air war in Southeast Asia. He said flying combat missions helped dispel negatives others tried to attach to black Americans. He flew 269 combat mission from Da Nang Air Base, South Vietnam, including 79 missions over North Vietnam.

“We in the military … were no different from American society,” he said. “What was going on in society was going on in the U.S. Air Force. … The leadership buried its head in the sand.

“They said, ‘We don’t have those problems in the U.S. Air Force, which was obviously wrong.” And before the war ended, the Air Force was forced to admit having racial problems because they were manifested by demonstrations and riots on bases, Newton noted.

“That’s when we confronted the problems head-on, and I’m proud to say the Air Force took a leadership role in solving racial problems in the military,” he said.

He later decided that going to Vietnam had been the right decision. “It taught me many things. As a young second lieutenant, I grew up very quickly,” Newton noted. “There was also a true realization that America is one of the greatest nations on Earth, and I was as much a part of America as anybody else.”

“Being in combat is certainly a difficult time,” the general said. “There were missions I was scared on, but that’s combat, and the things that help mature a young American, no matter who you are.”

Newton today likes speaking to groups of youngsters and encouraging them to get an education.

“My point to youngsters is, they can grow to be anything and anybody their capabilities will allow them to be,” he said. “What’s important to them is to continue to develop themselves to reach the summit they’re trying to get to. The opportunities are out there. That doesn’t mean it’s going to be easy, it doesn’t mean that someone won’t try to stand in their way. They have to learn how to negotiate themselves around those problems.”

He said education is the key to any door they’re trying to open. “That’s the one medium that helps to level the playing field,” said Newton, holder of a master’s degree in public administration.

The general also pointed out that military veterans play a pivotal role in America’s success as a nation.

“Whether you’re looking in local government, local organizations, the state and federal level, you’ll find veterans scattered throughout making great contributions to their communities and ultimately to the nation,” he said. Many of them are engaged with youngsters across the nation and trying to be their role models.

“I certainly encourage them to continue doing that,” Newton said. “Veterans certainly have the leadership skills, the commitment and the traditional values we desire in the nation. The more we contribute during the early ages of those youngsters, the less we’ll have to do to help to take care of them later.”

He said values taught by his parents and learned on the family’s small farm were catalysts to his success in adult life.

“I grew up in a segregated environment with reference to school and other kinds of public facilities,” Newton said. “It’s quite different now. We were in segregated schools under the concept of separate but equal. We certainly know that was not the case, unfortunately. Our schools didn’t have the same kind of quality and equipment as white schools. It was separate, but not equal.”

Living under a cloud of discrimination and a lack of jobs available for African Americans, his parents strived to instill traditional and important values American citizens should have, he said: respect for others, treat others as you’d like to be treated, don’t steal or lie, and always work hard.

“The values they taught us on that little farm, in that little town, have paid big dividends for me over the years, and they’re still doing that for me today,” the general noted.

His parents also always stressed the value of education, Newton said. “Their vision of education was a bit shorter than we have today,” he said. “Their goal was to ensure that every one of us got through high school. Fortunately, they were able to achieve that and more; all of us made it through high school and several of us made it through college.” The general has a sister and five living brothers.

Today, Newton is the pride of Ridgeland and Jasper County and affectionately called “Ridgeland’s highest flying son.” A book, “Flying High with General Lloyd Newton” is displayed in the county’s museum, along with mementos of his career.

The town and county honored him last October as Grand Marshall of their annual Gopher Hill Festival. He and his wife, the former Elouise M. Morning of St. Petersburg, FL., rode in a large, white, horse-drawn carriage driven by a driver decked out in a white tuxedo.

The nickname “Fig” was bestowed on the general during his senior year of college by a classmate, Howard Baugh, the son of the ROTC detachment commander at Tennessee State.

“He started calling me ‘Fig’ because my last name is Newton,” the general said. When he and his classmate went on active duty for pilot training, his friends always introduced him as “Fig.” “It just caught on,” he said, “and in Vietnam, I started wearing it on my name tag.

“Of course, I’ve eaten a lot of Fig Newtons, too,” he said with a laugh.