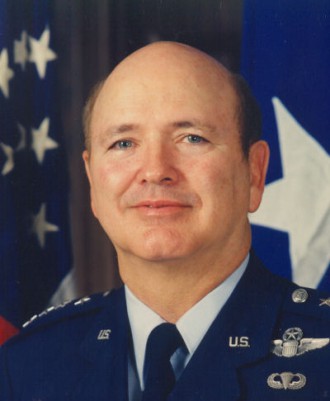 General Johnson was born in 1936, in Aiken, S.C. He graduated from high school in 1953 and then attended Clemson College. He was the outstanding graduate in thermodynamics and aerodynamics from the U.S. Air Force Academy in 1959, received a master’s degree in aeronautics from Stanford University In 1967 and a master’s degree in business from the University of Colorado in 1970. The general completed Squadron Officer School in 1965, Army Command and General Staff College in 1972, National War College in 1976, and the advanced management program at Dartmouth College in 1980.

He earned his navigator wings while a cadet at the academy. Upon graduation, he attended flying training at Bartow Air Base, Fla., and then Laredo Air Force Base, Texas, receiving his pilot wings in July 1960. His first operational assignment was to the 317th Troop Carrier Wing, Evreux-Fauville Air Base, France, where he flew C-130 transports throughout Europe, Africa, the Middle East and West Asia. He continued flying with the 317th when it transferred to Lockbourne Air Force Base, Ohio.

After completing graduate school at Stanford University, General Johnson volunteered for duty In South Vietnam. In 1967 he flew as a forward air controller In support of the South Vietnamese army and U.S. Marine Corps forces in the northern province and the demilitarized zone. He directed tactical close air support strike missions against enemy supply, storage, vehicle and troop targets. During the latter half of the year, he operated out of Plelku Air Base, along the Ho Chi Minh trail, at night. During his tour, he flew 423 combat missions, 71 of which were over North Vietnam or the demilitarized zone.

From May 1968 to July 1971 General Johnson was an instructor and assistant professor of aeronautics at the U.S. Air Force Academy. After graduating from Army Command and General Staff College, he served three years in the Plans Directorate, Headquarters U.S. Air Force, Washington, D.C. During his first year he was in charge of developing the tactical airlift force structure, then became leader of the team that developed and evaluated Air Force inputs to military strategy.

In November 1982 the general returned to Air Force headquarters as deputy director of programs and evaluation, Office of the Deputy Chief of Staff, Plans and Resources, and was chairman of the Program Review Committee. He was director of programs and evaluation, and chairman of the Air Staff Board, from July 1984 to October 1985, when he became deputy chief of staff for operations at SAC headquarters. In December 1986 he was assigned as vice commander in chief, Pacific Air Forces, Hickam Air Force Base, Hawaii. In August 1987 General Johnson became deputy commander in chief of the U.S. Central Command, MacDill Air Force Base, Fla., during Earnest Will, the United States tanker reflagging operations in the Persian Gulf. He became director of the Joint Staff, Joint Chiefs of Staff, the Pentagon, Washington, D.C., in November 1988. Effective June 1, 1992, General Johnson became the first commander of Air Mobility Command while remaining as commander in chief of the U.S. Transportation Command, a position he assumed in September 1989.