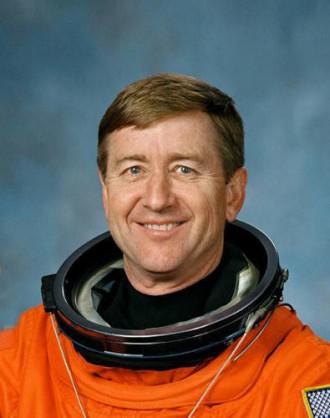 Frank L. Culbertson, Jr. was born in Charleston and lived for years in Holly Hill. He graduated from Holly Hill School in 1967 and earned a degree in aerospace engineering from the US Naval Academy in 1971.

Culbertson served aboard the USS Fox, a rocket escort ship, in the Pacific Ocean during the Vietnam War before being designated a naval aviator. After training as an F-4 Phantom Pilot, he served aboard the USS Midway out of Yokosuka, Japan. Aboard the USS John F. Kennedy, he graduated with distinction from the U.S. Naval Test Pilot School. He was program manager for all F-4 testing and a test pilot for automatic carrier landing systems in the Carrier Systems Branch at the Naval Test Center. He was training in the F-14A Tomcat until his selection as an astronaut candidate in 1984.

That same year, he was selected to NASA (group 10) and was subsequently assigned to Houston, TX for astronaut training. He has logged more than 4,400 flying hours in more than 40 different types of aircraft, and he has made more than 450 carrier landings. On his first shuttle flight November 15-20, 1990, he served as Captain (co-pilot) aboard Atlantis. On his second space flight aboard Discovery September 12-22, 1993, Culbertson served as Commander.

Culbertson has 344 total hours in space flight. He retired from the U.S. Navy as Captain, on March 8, 1997 and is presently NASA’s program manager for the shuttle-MIR Program. In 1997, he was named South Carolina Aviator of the Year.

EXPERIENCE: Culbertson graduated from Annapolis in 1971 and served aboard the USS Fox (CG-33) in the Gulf of Tonkin prior to reporting to flight training in Pensacola, Florida. After designation as a Naval Aviator at Beeville, Texas, in May 1973, he flew F-4 Phantom aircraft in VF-121, NAS Miramar, California, in VF-151 aboard the USS Midway (CV-41), permanently homeported in Yokosuka, Japan, and with the USAF in the 426th TFTS at Luke Air Force Base, Arizona, where he served as Weapons and Tactics Instructor. Culbertson then served as the Catapult and Arresting Gear Officer for the USS John F. Kennedy (CV-67) until May 1981 when he was selected to attend the U.S. Naval Test Pilot School, Patuxent River, Maryland. Following graduation with distinction in June 1982, he was assigned to the Carrier Systems Branch of the Strike Aircraft Test Directorate where he served as Program Manager for all F-4 testing and as a test pilot for automatic carrier landing system tests and carrier suitability. He was engaged in fleet replacement training in the F-14A Tomcat at VF-101, NAS Oceana, Virginia, from January 1984 until his selection for the astronaut candidate program.

He has logged over 6,000 hours flying time in 40 different types of aircraft, and 350 carrier landings.

NASA EXPERIENCE: Selected as a NASA astronaut candidate in May 1984, Culbertson completed basic astronaut training in June 1985. Technical assignments since then included: member of the team that redesigned and tested the Shuttle nosewheel steering, tires, and brakes; member of the launch support team at Kennedy Space Center for Shuttle flights 61-A, 61-B, 61-C, and 51-L; in 1986, worked at the NASA Headquarters Action Center in Washington, D.C., assisting with the Challenger accident investigations conducted by NASA, the Presidential Commission, and Congress; lead astronaut at the Shuttle Avionics Integration Laboratory (SAIL); lead of the First Emergency Egress Team; and lead spacecraft communicator (CAPCOM) in the Mission Control Center for seven missions (STS-27, 29,30, 28, 34, 33, and 32). Following his first flight, he served as the Deputy Chief of the Flight Crew Operations Space Station Support Office as well as the lead astronaut for Space Station Safety. He was also a member of the team evaluating the hardware and procedures for the proposed mission to dock with the Russian Space Station Mir. Following STS-51, Culbertson was Chief of the Astronaut Office Mission Support Branch; then Chief of the Johnson Space Center Russian Projects Office. In 1994, Culbertson was named Deputy Program Manager, Phase 1 Shuttle-Mir, and in 1995 became Manager of the Shuttle-Mir Program. He was responsible for a multi-national team which executed nine Shuttle docking missions to the Russian Space Station Mir, with seven astronauts spending 30 months cumulatively on-board the Mir Station, plus all the associated science and docking hardware to ensure the success of the joint program, a precursor to the building of the joint International Space Station. Just prior to his current flight assignment, Culbertson spent one year as Deputy Program Manager for Operations of the International Space Station Program.

A veteran of two space flights, Culbertson has logged over 344 hours in space. He is currently in training to command the Third Expedition to the International Space Station on a five-month mission scheduled to begin in the summer of 2001.

SPACE FLIGHT EXPERIENCE: STS-38 Atlantis (November 15-20, 1990) was a five-day mission during which the crew conducted Department of Defense operations. The mission concluded after 80 orbits of the Earth in 117 hours, 54 minutes, 28 seconds, the first Shuttle to land in Florida since 1985.

STS-51 Discovery (September 12-22, 1993) was a ten-day mission during which the crew deployed the U.S. Advanced Communications Technology Satellite (ACTS/TOS), and the Shuttle Pallet Satellite (ORFEUS/SPAS) carrying U.S. and German scientific experiments, including an ultraviolet spectrometer. A seven-hour EVA was also conducted to evaluate Hubble Space Telescope repair tools and methods. After the SPAS spacecraft had completed six days of free flight some 40 miles from Discovery, the crew completed a successful rendezvous and recovered the SPAS with the Shuttle’s robot arm. The mission concluded with the first night landing of the Shuttle at the Kennedy Space Center. Mission duration was 158 Earth orbits in 236 hours and 11 minutes.