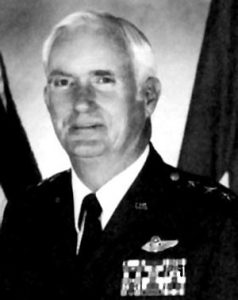 General Shuler’s love of flying began during the years of WWII, when he was able to understand and follow the war effort, particularly the air war. It was the genesis of his desire to become a pilot. He grew up in Orangeburg and in Caracas, Venezuela where his dad was a partner in a Cessna 140. When the family returned from Venezuela in 1949, his interest in learning to fly increased and in 1954 he soloed at Jennings Field in Orangeburg under the instruction of Aviation Hall of Famer T.C. Hadwin. The general holds a single and multi-engine land rating along with an instrument rating as well as a N265 class rating.

General Shuler attended The Citadel and majored in Civil Engineering. He was president of The Citadel Flying Club his senior year.  Following completion of the Air Force ROTC program, he was commissioned as a second lieutenant on 6 June 1959 as a distinguished graduate. He entered active duty on 18 July and began pilot training. First came preflight training at Lackland AFB, then Primary at Moore AB and then jet basic training at Laredo AFB all in Texas, receiving his wings on 2 September 1960.

His first operational assignment was as a B-52 pilot and then aircraft commander at Carswell AFB and Dyess AFB respectively in Texas. During these tours he flew 22 nuclear airborne alert missions of 24 to 25 hours in duration in the B-52, six of which were flown during the 1962 Cuban Crisis.

Following graduation from Rensselaer Polytechnic Institute with a Masters degree in Engineering Management in June 1967, the general was assigned to check out as an aircraft commander in the F-4D Phantom II at George AFB, CA. A combat tour followed with the 12th Tactical Fighter Wing at Cam Ranh Bay Air Base in Vietnam. He served as a flight leader flying 107 combat missions over North Vietnam, South Vietnam and Laos. He also flew 15 combat support missions in the F-4C along the Korean demilitarized zone as well as 57 training missions at Taegu AB, Korea during the Pueblo Crisis.

Following the combat tour in 1969, General Shuler was assigned to Headquarters 2nd Air Force, Barksdale AFB, LA. as a civil engineering officer becoming the Assistant Deputy Chief of Staff for Civil Engineering. Additionally, he served as an instructor in the T-39 aircraft during this assignment.

In 1972 he was assigned as assistant executive officer to the Commander in Chief of US Air Forces in Europe at Lindsey Air Station, Wiesbaden, West Germany, which moved to Ramstein Air Base, West Germany in May 1973. There he served as the Base Civil Engineer and Commander of the 86th Civil Engineering Squadron. Later, upon returning to the States, he became Director of Programs for Engineering and Services at Strategic Air Command Headquarters. He was selected in 1977 to be the Executive Officer to the SAC Commander in Chief. Over the next several years he commanded two B-52 Bomb Wings, two SAC Air Divisions and served as the Director of Operations for SAC.

In March 1988 General Shuler took command of the Eighth Air Force, a command of 57,000 personnel operating B-52, B-1B and FB-111 bombers, KC-135 and KC-10 tankers and TR-1 reconnaissance aircraft. The command would play key roles during operations JUST CAUSE and DESERT SHIELD/STORM. He led his troops from the headquarters as well as the field, flying tanker tactical and combat support missions.

After retirement on 1 June 1991 General became actively involved in the creation of The Mighty Eighth Air Force Museum located near Savannah, GA. He was instrumental in the planning, development and construction of the museum, which was opened to the public in May 1996. He served as its first Chairman of the Board and Chief Executive Officer for a period of 12 years.