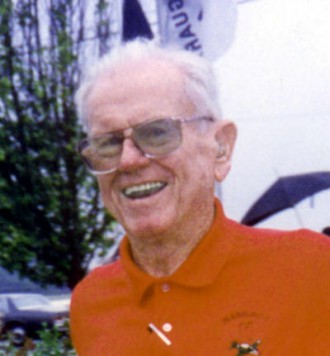 As a child, Buck Moss made his own model airplanes, and by 1932, he had soloed in an OX-Waco 9. In 1934, he earned his aircraft mechanic certificate.

He served as Basic Flying and Instrument Instructor at Bush Field in Augusta and from 1945-46. He served in the U.S. Navy, receiving many military medals. In 1946, he built and operated the Fairforest Airport and Fairforest School of Aeronautics. From 1950 to 1964, he owned Palmetto Aviation, located at the Spartanburg Downtown Airport. In 1987, Moss was named Spartanburg’s Aviator of the Twentieth Century.

Cyrus Robert “Buck” Moss was born October 9, 1915. At a young age, Buck became fascinated, excited and awed by airplanes, airports and flying.
From early childhood he carved wings and propellers and made his own airplane.

Moss started flying in 1931 and soloed in an OX-5 powered OX-Waco-9 and earned his airman’s certificate # 34152 in 1932 and his mechanic certificate # 894334 in 1934. Buck financed his flying lessons by working at Beaumont Mills and with some help from his father.

Buck Moss promoted the nation’s interest and excitement of aviation in its infancy by barnstorming over the eastern USA, giving rides ranging in price from a quarter to a dollar.

He made his own airports by arranging with a farmer to use his field – after he landed in it! He endured many inconveniences such as spending a few hours in jail when a minister swore out a warrant against him for disturbing worship services.

He participated in air racing, banner towing, stunt flying, and made over 50 parachute jumps.

In 1940, Moss went to Washington, DC, with Bevo Howard, Bob Turner, and Colonel Roscoe Turner to set up a civilian pilot training program to teach college students to fly. This become the foundation of the Army Air Corps Training Program for WWII.

From 1943-1944 he served as Basic Flying and instrument instructor under the United States Army Air Corps Eastern Flying Training Command at Bush Field, Augusta, Georgia. From 1945-1946 he served in the US Navy where he received several metals and was honorably discharged as the war effort came to a close.

He returned to Spartanburg and from 1946-1950 build and operated the Fairforest Airport including the Fairforest School of Aeronautics and the FAA approved school training students under the G.I. Bill. He also operated an Fixed Base Operation with agricultural crop dusting and spraying services and established an FAA approved ground school along with other services.

From 1950-1964 Moss was owner of Palmetto Aviation located on the Spartanburg Municipal Airport. This operation offered complete aviation services to both civilian, military and airline aircraft. In addition, Palmetto provided catering services to the airlines serving Spartanburg during this period.

Buck Moss also served as the airport manager and represented Spartanburg locally and national at all aviation meetings. He negotiated contracts with the airlines, helped draw up contracts purchasing land adjacent to the airport and supervised the construction of the instrument landing system, the installation of approach lights and extended the runways. His efforts made Spartanburg Municipal one of the finest airports anywhere in the USA.

His management and promotion skills were instrumental in the Spartanburg Downtown Airport air traffic control facility being named “Facility of the Year” by the national Air Traffic Controllers Association in October 1973.

Between 1966 and 1987, among all his other activities, Moss served as Assistant Manager and Flight instructor for Thermal Belt Aviation and flew experimental phosphorus flare test missions in a P-51 for the Northrop Corporation’s testing of systems to light military targets.

During his career, Buck Moss flew over 100 different type of aircraft ranging from testing homebuilt aircraft to most of the military aircraft flown in WWII. Buck accumulated over 38, 000 hours of flight time while training over 5,000 students during his 50+ year career.

Buck Moss was known for his enthusiasm, unmatched flying skill and knowledge, safety, patience, accentuating the positive, good humor, absolutely wonderful story telling skills, compassion, kindness, gentility and his being able to kindle that excitement and love of flying in his students and compatriots.

For these and many other reasons, the aviators of Spartanburg named Cyrus “Buck” Moss the Spartanburg Aviator of the Twentieth Century in a resolution passed by acclamation on October 28, 1987.

(Adapted from the referenced resolution with special thanks to David Fudge, Commander of the Spartanburg SC “Warbirds Inc.”)

(Photo of Buck Moss with an AT-6 provide by his daughter, Frances Moss Kuhne. She soloed on her 16th birthday at the Spartanburg Airport with her father as flight instructor.)

Mr. Moss promoted aviation in its infancy, barnstorming about the country, selling rides, air racing, towing banners and making over 50 parachute jumps. He established a civilian pilot training program in 1940 adopted by the Army Air Corps. He was an Army flight instructor and was also an enlisted Navy flight instructor in the closing days of WWII.

He created the Fairforest Airport and School of Aeronautics, approved for instruction under the G.I. Bill. He operated crop dusting and spraying services and was airport manager in Spartanburg, South Carolina where he supervised construction of the instrument landing system, installation of approach lights and extension of the runways. In the 1950s he provided accommodations and meals to VRs 31 and 32 ferry pilots who RON’d at Spartanburg during periods of adverse weather.

Moss flew more than 90 types of aircraft ranging from the Waco to the P51, AD, helos and experimental and ultralight aircraft. He accumulated over 38,000 flight hours and taught more than 5,000 students. He was a member of the Quiet Birdmen and Spartanburg Warbirds, was inducted into the South Carolina Aviation Hall of Fame in 1993 and was Spartanburg’s Aviator of the Twentieth Century. Many students, friends and family gathered for Buck’s memorial service at the Spartanburg Memorial Airport. (CAPT Speedy Seay, USN (Ret.)