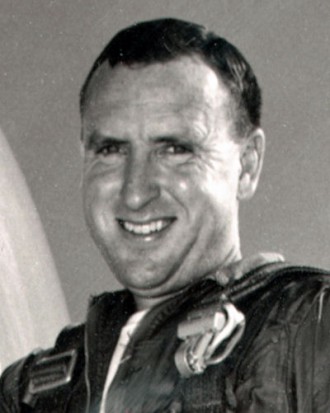 Barnie McEntire’s love of aviation began as a teenager when he washed Piper Cubs at Columbia’s Owens Field. After graduating from the University of South Carolina, he entered pilot training in 1939, earned his pilot’s wings in 1940 in the Army Air Corps and began a 22-year military career.

He served in World War II as chief pilot for Air Transport Command’s North Atlantic Division flying B-24 bombers. In 1946, he organized the first South Carolina Air National Guard units. On February 18, 1959, he earned rank of Brigadier General. He became the first Air National Guard pilot to be proficient in flying a Mach 3 F-104 Star fighter jet in 1960. In November 1961, the Congaree Air Base was officially renamed to honor his dynamic military career as a pilot, general and patriot.

From Wikipedia, the free encyclopedia

McEntire JNGS is named for the late Brigadier General Barnie B. McEntire, Jr., the first commander of the SCANG and its first general officer. McEntire died in May 1961 when he rode his malfunctioning F-104 into the Susquehannah River to avoid crashing in the populated area of Harrisburg, PA. The base was previously known as Congaree Air Base and was used in World War II as a U.S. Marine Corps training base. It was re-named McEntire ANG Base in October 1961 by Governor Ernest F. Hollings. It was re-named McEntire Joint National Guard Station in 2005 to reflect the joint presence of Army and Air National Guard units.

The South Carolina Air National Guard was formed in December 1946. Today 1,250 members train at McEntire JNGS. About 900 of those are traditional Guard men and women. About 300 are full-time federal employees (technicians). About 50 are state employees (some of them are also traditional Guard members). The 169th Fighter Wing is the primary unit of the SCANG. Wing units include the:

The SCANG has been called to active military service for five major contingency deployments in its 55-year history. In 1950, SCANG members were called to serve for the Korean War, and its members served at various installations in the United States and abroad. In late 1961, the SCANG was called to active duty during the Berlin Crisis, and the 169th Tactical Fighter Group was stationed at Moron, Spain. In late 1990, units of the SCANG were activated and deployed to Saudi Arabia for Operation Desert Shield/Storm, flying 2,000 combat missions and dropping 4 million tons of munitions, while maintaining the highest aircraft mission capable rate in the theater. In January 2002, aircraft and personnel of the 169th Fighter Wing were deployed to Southwest Asia in support of Operation Enduring Freedom, directly participating in combat operations. In late February 2002, the 240th CCBS deployed a 50-member team to Central Asia in support of President Bush’s war on terrorism. The 240th members returned in August after six months in theater. In September 2002, the 245th ATCS deployed to Afghanistan Asia in support of Operation Enduring Freedom, returning in January 2003. In February 2003, nearly 400 members of the 169th FW and all of its F-16s were mobilized and deployed to Southwest Asia as part of what became Operation Iraqi Freedom. The 169th was attached to the 379th Air Expeditionary Wing, stationed in Qatar. The unit flew more than 400 combat missions, performing the Suppression of Enemy Air Defenses (SEAD) mission and flying numerous precision bombing missions over Iraq. The 169th FW was also a regular participant in the Air Expeditionary Force, which patrolled the Iraqi no-fly zones. The unit has deployed for: Operation Southern Watch (Qatar, 1996), Operation Northern Watch (Turkey, 2000), Operation Southern Watch (Saudi Arabia, 2001). The 169th FW was the first Air National Guard unit to deploy alongside active-duty Air Force units to comprise an AEF.

(Aircraft description from T.O. 1F-104A-1) F-104 aircraft are high-performance day and night fighters powered by an axial-flow, turbojet engine with afterburner. F-104A and C are single place aircraft, built by Lockheed Aircraft Corporation, are designed for cruise at high subsonic speeds and combat at high supersonic speeds. Notable features of the aircraft include extremely thin flight surfaces, short straight wings with negative dihedral, irreversible hydraulically powered ailerons, and a controllable horizontal stabilizer. The wings, with leading and trailing edge flaps, have a boundry layer control system which is used in conjunction with the trailing edge flap to reduce landing speeds. A drag chute is installed to reduce the landing roll.

This aircraft information is from the USAF Museum Archives.
The Museum has an F-104C on display in the Modern Flight Hangar
and an F-104A on display in front of the Museum complex.

This is the sixth in our series on the history of the first Air National Guard units.
The shooting war had ended in 1945 and now the United States found itself at the beginning of a new confrontation-the Cold War. Former British Prime Minister Winston Churchill had given his famous “Iron Curtain” speech in June 1946, while America was preparing to face its former ally, the Soviet Union. The test of ideologies would span half a century

Composed of the 157th Fighter Squadron; 157th Weather Station; Utility Flight 157th Squadron; and Detachment B, 216th Air Base Group, the South Carolina Air Guard was a whole 52 membets strong, broken down to 14 officers and 38 enlisted men that December.

The previous summer General James C. Dozier, the adjutant general of South Carolina, had appointed Maj Robert H. Morrell as one of the 157th’s first members. These two men were charged with recruiting, organizing and administering the new air arm of the South Carolina Guard.

Congaree was built as an Army Air Corps facility in 1942 and served as a training base for the Army Air Force (AAF) P-38 and P-47 pilots until December 1943. In the spring of 1944, the AAF turned the base over to the Navy to be used as a Marine Corps air station to train fighter pilots. Congaree was closed at the end of World War II (WWII).

South Carolina’s first Air Guard commander was then Lt Col Barnmie B. McEntire Jr, was a veteran pilot of the Air Transport Command during WWII. McEntire began his flying career as a teenager washing airplanes at Owens Field, South Carolina. McEntire would become the youngest general in the Air Guard before his untimely death in 1961 when his F104 flamed out on take off from Olmstead Air Force Base, Pennsylvania. Rather than bailing out over a populated area, General McEntire guided his disabled aircraft onto an uninhabited island in the Susquehanna River In November 1961, Congaree was renamed McEntire Air Force Base to honor the general’s memory. Morrell became the second commander of the SCANG, serving until 1976.

The SCANG was called to active duty twice under Gen McEntire and Morrell’s leadership. In October 1950, the unit was activated for the Korean War and assigned to 14th Air Force. At this time, the SCANG was reassigned from F-5 Is to RF-80s, serving at Furstenfelbmk AB, Germany. Four pilots volunteered for duty in Korea, and after the war, three remained in the Air Force. Capt Eddie R. Elkin, who flew night medium bomber missions, returned to South Carolina, becoming the unit’s only pilot to fly combat missions in both WWII and Korea.

Released from active duty in 1952, the SCANG changed from flying F-5 Is to F80s to F-86s while performing runway alert missions. Early in 1960, South Carolina became the first Air Guard unit in the nation to receive the F-104 Starfighter Shortly thereafter, the South Carolina Air Guard was activated again, this time for the Berlin Crisis. The majority of the 747 men called to active duty left from McEntire in November for assignment to Moron AB, Spain. Other members would serve at bases in France and Germany until the unit was released from active duty in August 1962. It was during this call-up that the SCANG adopted its unit symbol, “Swamp Fox,” given by the British to the state’s Revolutionary War general, Francis Marion. Upon release from active duty, the unit resumed its air defense role, transitioning in 1963 to the F-102 Delta Dagger. The F-102 remained in the SCANG until 1974.

After the Vietnam War ended, the SCANG was reassigned to the Tactical Air Command (TAC) in A-7D aircraft. The SCANG met these challenges by becoming the first Air Guard unit in the nation to: receive an operational readiness inspection while deployed in 1976; deployed from home station to Hawaii in 1977; and deployed overseas for annual training in 1978.

In 1983, the SCANG set another precedent when it became the first Guard unit in the nation to be assigned the F-16A Fighting Falcon. It was in the F-16 that the SCANG distinguished itself during the Gulf War Activated in November 1990, the SCANG began deploying to Al Kharj AB, Saudi Arabia. By the time DESERT STORM began, 24 F-16s, 42 pilots and 757 support personnel had deployed to the base 60 miles southeast of Riyadh. During the war, the unit flew 1,359 sorties, dropping almost 4 million pounds of bombs, and achieving an 87 percent fully mission capable rating, the highest of any American Air Force unit in the theater of operations.

In 1994, South Carolina’s 169th Fighter Wing became the first Air Guard unit to receive new F-16C Block 50 aircraft right off the assembly line, and in 1996, it became the first unit in 9th Air Force history to receive an overall outstanding on its operational readiness inspection.

At the half-century point, the SCANG continues to serve the nation around the world. In 1997, the SCANG had units performing duty in Hungary in support of Operation JOiNT GUARD, in Qatar as part of an Air Force Air Expeditionary Force, and Costa Rica for the National Guard Bureau’s nation building program.

Beginning with a small group of men in December 1946, the SCANG’s tradition of service to nation, state and community has continued unbroken to this day for more than a half century.
Copyright National Guard Association of the United States Jul 1997
http://www.ngaus.org/