The SCAA maintains a calendar of aviation events in South Carolina and nationally.

If you would like to have your event listed on our calendar please email us. Thank you! 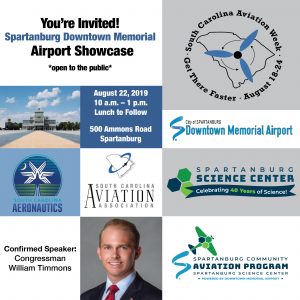 Spartanburg Memorial Downtown Airport, with both city and county officials, celebrates its impact on Upstate commerce as well as the aviation industry’s next generation. During this event airport officials will thank and recognize the federal and state support of the airport’s runway expansion project, which allows the airport to increase it’s capacity to serve economic development. The event will also recognize the airport’s partnership with Spartanburg Science Center through the Spartanburg Community Aviation Program (SCAP).

Planned in partnership by South Carolina Aeronautics Commission and South Carolina Aviation Association, S.C. Aviation Week is August 18 – 24, 2019, and is a statewide celebration of the economic and educational impact of the aviation industry. This event is open to the public. Media inquiries may be directed to Melanie Friscoe.